We had our first of several design center appointments, and oy! SO. MANY. CHOICES. I consider myself to be a pretty decent decision maker, but don’t love having an over abundance of choices. I know what I love, like, and hate.
When I was choosing a wedding cake, the bakery had three big fat binders full of sample cakes to be inspired by. I said, “I’ll look at this binder,” picked one up, “and choose from this one. I’ll never know what I missed.” There’s really no need to look at 900 cakes is there? No.
Not to mention, Brian and I make almost every decision together…like, I’ll call him at work to discuss something at COSTCO. I know I CAN make the decision, I just really like to know what he thinks! So, many phone calls and picture texts were exchanged.One of my first choices was exterior paint color. As in, here’s a two inch thick binding of paint swatches. Pick one. Okay, yikes.  But, I have always wanted a yellow house. I started in the yellow family and decided on one. I think this is it.
What do y’all think? 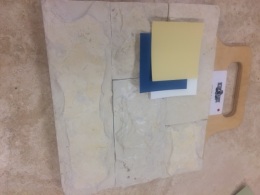 The stone is what will be used as skirting under the siding and down to the ground. There won’t be much of it you can see. The blue is what I chose for the front door! A blue front door! Pretty excited about that….obviously. The white will be trimming the windows. Here’s just a sample picture of the house so you can picture it: 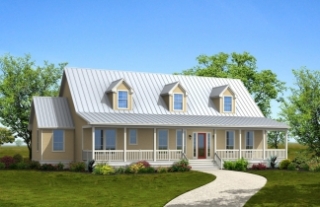 Here’s my interior paint choices: Toasted Almond. Yes, totally up my alley. (Brian’s reaction: “boring.”-sorry honey.) If you know me at all, you know that tan is my neutral go to. You also know that I love throw pillows. All throw pillows go with tan. So, toasted almond it is. The cream color is for the beadboard wainscoting throughout the house. 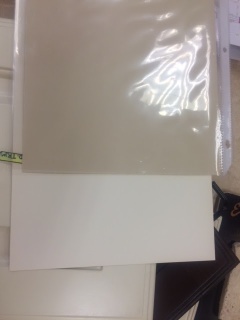 The kitchen was where I spent the bulk of my time during my appointment and where I still need a little help. I’ll post more on that later.

In other house news, we have a survey, should have our official deed this week and have crossed off the first step towards getting power set up. Moving right along….

Stephanie lives in Texas with her handsome, handy husband and two kids. Together, they are working to realize their full potential as "country people" and leave a legacy with their beautiful land. View all posts by Stephanie